My FAQs on Missional Church 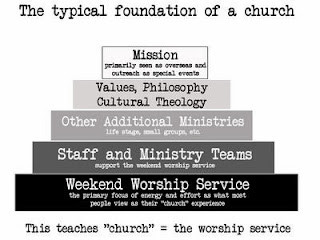 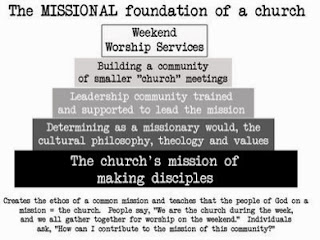 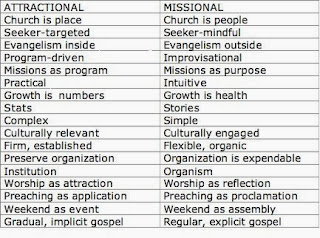 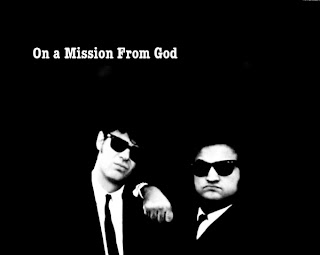 Innovate or Die: More Missional Nuggets from “On The Verge” by Alan Hirsch and Dave Ferguson—

1.    Crises create innovations so don’t respond with a shrinking scarcity reflex during a crisis but respond with abundance response: when Christian Community Church in Chicago went $500,000 below projections on its budget during the economic crisis a few years ago they laid off some staff and met to decide on more drastic measures, but decided instead to be drastic in a different way; they focused for the first time on the 20 percent of the population in extreme poverty, in real dire straits, putting their issues in perspective, and started their response by launching a fund drive for the world’s poor and raised $250,000 the first year and doubled the next year and kept growing. It gave them a real story of church for people to be generous about as well.

3.     Keep innovating. Fifty years ago a church could have one great innovation and live on and off it for decades; now churches need to be more like surfers than battleships and catch many waves of innovation every six months to a year. Always be looking for the new things God is doing in and around you.[The new thing can be a very old thing old practices etc. that has been forgotten].

4.     If your church closed today would the community notice, and care? If you don’t like change, you are going to like irrelevance even less.

5.     Innovative missional Leaders are out front, as role models, being the change they wish to see, relocating, acting missionally personally; leaders grow curiosity not certainty; leaders let unexpected successes open up their paths to innovation, not planned endeavors, and know that the past success is what will blind them to necessary innovation; leaders are aware of places of incrongruity, where reality is subverting preconceived notions of what will happen, for these are where innovation will emerge; leaders know the needs of their community; leaders partner with others for mutual opportunities (one church connected with a local apartment complex, knowing they need renters to remain in order to be most successful, and that they have some apartments always vacant so they got an apt donated and in return located a community life coordinator there to build relationships which helped people stay in the apartment complex longer renewing leases and it connected the people with the church.) Demographics changing around you are opportunities to go deeper into community mission, not reasons to move out or close. Leaders look for ways to change and broaden their perceptions and default modes. Leaders say Yes and then ask How. Don’t be afraid to be a fool. Saying yes creates a permission giving culture; you don’t always act and fund what you say yes to, but it gives opportunity to explore and try; it democratizes innovation, making innovation the responsibility and gift of all.

Ron
Feel free to email me at RevRonRobinson@aol.com